How Not To Schmooze In Hollywood 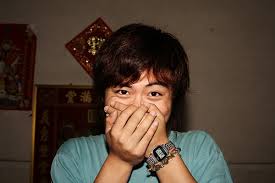 At the same time the idea for this article popped into my head, so did the face of an old friend of mine. That friend is actor-writer-director-producer “Robert.” Many years ago Robert and I were roommates for two years or so after meeting up through the SAG board. We hadn’t been in town too awful long, and even though I was looking for a girl roommate, and he was looking for a guy, we each settled for our second choices, and we moved into a cute little apartment right near Melrose and La Brea.

Robert was a great roommate. Sometimes he’d come home at about 2 o’clock in the morning when I was already in bed, and I’d hear strange noises in the kitchen — the kind where you know someone’s trying to be quiet but now you’re suddenly wide awake from curiosity? Yeah, that kind. I wanted to know what he was doing. So I’d get up and poke my head out of my room, and there he’d be. Sweeping and mopping the kitchen floor. Even after a night out. He had come home and gotten my little note asking him to take his turn at the kitchen cleaning, and he just wanted to get it done — at 2 o’clock in the morning. I would just smile, have little endearing thoughts about Robert, and go back to bed.

But not only was/is he a great guy roommate who was easy to get along with, he is a Master of the Schmooze. (The truth is, he’s told me, that he doesn’t even think of it as schmoozing, he’s just being himself. But to myself and others, we can see that he has an ability to connect with people in way that many of us would like to have for our own schmoozing purposes.)

Many years after we were roommates, I took him to an event at the Academy where a producer friend of mine was screening his film. After this screening for about 300 people, there was a cocktail party that was very crowded. Robert and I tried to make it over to congratulate my friend on his film, but we couldn’t take three steps without someone stopping Robert to connect with him. Either they had worked with him and were happy to see him, or someone close to them had worked with him and they re-introduced themselves. It was a phenomenon. The interesting thing about it, however, is that these people were not just crazed fans happy to meet Robert. The way they spoke to him was with genuine affection and a happy smile on their faces. It was clear that they truly liked him as a person. It definitely broke down the paradigm that says everyone in Hollywood fake and only wants to use you.

Another thing that has particularly struck me about Robert over the years is how many people he keeps in touch with on a personal level. I know for myself I can get really lazy about going out and mingling. But frequently when I talk to Robert, he’ll have three birthday parties he needs to hit in one night, and he makes sure he does it, too. He makes it a priority to keep in touch, accept invitations, show up, and stay connected to people. When asked how he got to be like this, a good ol’ Oklahoma boy, he just says, “Well, I don’t know since I don’t even think about it. But I grew up with two great parents who were outgoing and funny and a house full of brothers. Maybe that had something to do with it. I just enjoy people.”

Okay, so I could go on and on about how great Robert is at connecting with people, but more importantly, I thought you might like to hear a few tips from him! So after fondly relishing my memories of him, I called him and asked him for some tips to pass on.

After making it clear that he doesn’t think of himself as an expert on this (even though he’s giving a speech about this same thing in a couple weeks), he said a few short words which I have summarized as follows.

This is a lesson that goes back to who knows when, but for sure Dale Carnegie wrote about it in his seminal book “How To Win Friends and Influence People.”

Don’t approach people with a hidden agenda. If you want to speak about work, don’t beat around the bush. Be specific about what you want to do. When people sense that you are trying to hide it, it’s really obvious, and they’ll see it a mile away, and it’ll get you nowhere.

Key Three: Allow for a follow-up.

Learn something about the person you’re talking to and be interested in what they have to say. Have a sense of humor. Leave them with a real sense of your personality.

So that’s what Robert had to say. He also made the point that as soon as you start doing these things as “tips,” then you’re actually not doing it all.

“No matter how you say it, you have to be genuine and real with other people.”

So there you go. Hollywood may have a reputation for being a city of users, but there really are some real, genuine people out there. And when you are that way, you stand out from the crowd!

In Smart Girls on Agent Meeting Role Play, you can learn to craft a pitch of yourself and practice your small talk so that you can get out of your head and have your real self shine through!

« How To Write A Screenplay: The Basic Plot Points That Help Sell Your Script » Themify Builder